From Middle-earth: Shadow of War Wiki
Jump to: navigation, search 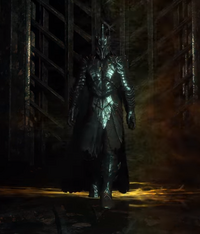 Sauron, also known as the Dark Lord or the Enemy, is the main antagonist of the game series, he serves as a central background antagonist in Middle-earth: Shadow of Mordor, the main antagonist and final boss in The Bright Lord Story Pack, and the main antagonist of Middle-earth: Shadow of War. One of the most influential figures in Arda's history, he was the greatest smith of Aulë, the most-trusted lieutenant of Morgoth and the forger of the One Ring. He fell into evil long ago, when his love for coordination turned into a lust for the power to order all things according to his own wisdom. As the self-stylized Ruler of Middle-earth. Sauron commanded armies of orcs, trolls, wicked-dwarves, evil-men, dragons, wolves and other fell beasts to enslave the Free Peoples. While Sauron lived in the physical realm, he was feared throughout all of Middle-earth, even to the farthest reaches of the world.

The battle with Sauron takes place at the very end of the game, where you'll battle as Celebrimbor with Eltariel at your side. Sauron begins fighting in his most basic elf form with quick sword strikes and magical attacks.

His second form has Sauron gain his armor and use his mace and stronger magical attacks. Occassionally, Sauron can push you back with his magic when you run up close to attack him. Countering his attacks and dodging his swings are super important to maintaining the offensive and avoiding heavy damage.

Sauron's final form during battle is a stronger version of his original form, but with faster attacks and more powerful magic that heavily damages you with each connecting attack. Countering and striking after are key to getting through the final part of the battle.